Written by Cognacity for Doctify

Anxiety is a normal but unpleasant feeling of unease, worry or fear that can range from mild to severe. It is a universal feeling driven by the evolutionary “fight-or-flight” response, which increases blood flow to muscles and suppresses irrelevant bodily functions (e.g. digestive system, which can cause nausea). In other words, your body is preparing for survival.

Many would say that, in the world we live in, such a strong physical response to the environment is not necessary. Unfortunately, many of us experience anxiety as a chronic pathological response to stimuli that pose no threat at all and can dominate one’s mental (and sometimes physical) state e.g. catastrophizing, defined as persistently imagining the worst possible scenario.

Historically, both obsessive-compulsive disorder (OCD) and generalized anxiety disorder (GAD; in addition to associated disorders such as panic disorder, social anxiety disorder, phobias etc.) were considered anxiety disorders. They both feature a disproportionate fight-or-flight reaction to non-threatening stimuli. They also both usually involve some sort of maladaptive coping mechanisms to relieve distress, such as avoidance (e.g. avoiding knives, trains, going outside and taking certain routes associated with anxiety). Obsessions in OCD also evoke anxiety if compulsive behaviours are not carried out. So why has the fifth edition of the Diagnostic and Statistical Manual of mental disorders (DSM-V, 2013) separated these diagnoses into different chapters?

A defining characteristic of an OCD diagnosis is the presence of both obsessions and compulsions. Although some anxiety disorders (GAD) involve repetitive behaviours, they do not present in such a rigid, ritualized fashion. Obsessions are like intrusive thoughts that appear in somebody’s train of thought unexpectedly. Subsequently, a substantial amount of time is spent enacting their compulsive coping behaviours — more than an hour a day — which interferes with their everyday responsibilities. 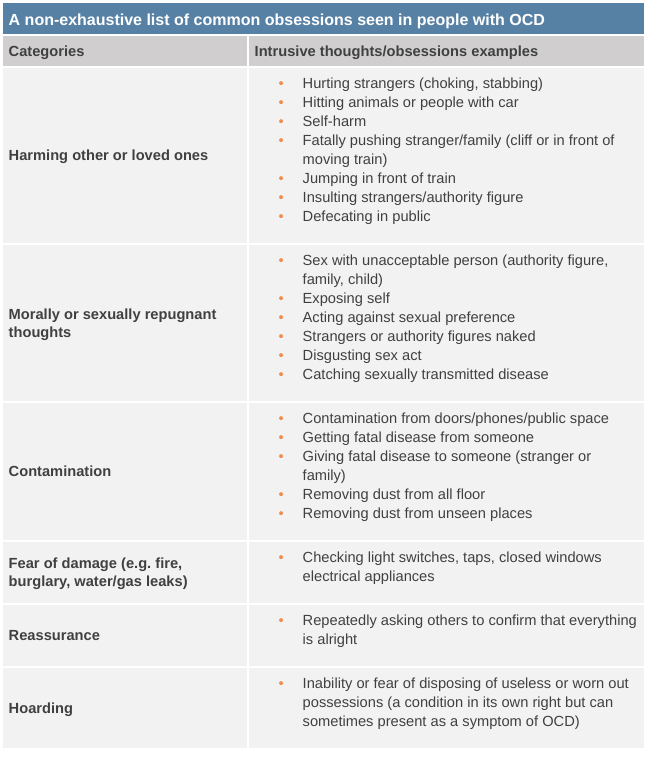 Intrusive thoughts that turn into obsessions

The disorder manifests through intrusive thoughts (see table 2 for examples). They are unwanted, unpleasant thoughts that are usually not in line with the individual’s moral compass (ego-dystonic). In OCD, they extend far beyond every day worries seen in other anxiety disorders and are unrealistic, sometimes containing supernatural or magical references (e.g. obsessions with higher powers resulting in compulsive prayer rituals).

Although intrusive thoughts are experienced universally, they become pathological when somebody makes a personal interpretation of them. In other words, they believe that the thought may come true in real life or that they may be responsible for its occurrence just by having them in the first place (e.g. thinking about a loved one having a fatal accident will influence the chance that it happens – and it will be their fault). As opposed to other anxiety disorders, worry and fear in OCD is usually about something that will happen far in the future or about something that is unrealistic/unrelated to current or relevant issues (e.g. blaspheming resulting burning in hell after death vs. social anxiety at a party).

Obsessional thoughts can be set off by a trigger, which can be a mental thought or physical object/place (e.g. the sight of a knife triggering thoughts of stabbing somebody or self). Consequently, there is an overwhelming urge to prevent their thoughts from having real consequences in the real world, particularly if they are related to harm, loss or danger to others. Understandably, a loss of control of these thoughts can cause distress if they feel responsible for any negative outcomes.

Most people would want to avoid burning in hell or causing harm to others, so how do people “control” these thoughts? A person with OCD will have a set of behaviours or mental rituals they perform. Their perceived purpose is to counteract the chance of intrusive thoughts having real-life consequences and neutralize their responsibility if they do occur (which in almost all cases, they don’t). This can involve repeated checking, counting or other behavioural routine e.g. tapping leg in certain order. As with other anxiety disorders, avoidance is a common compulsive behaviour whereby person avoids physical objects or situations that may trigger obsessions e.g. avoiding knives or somebody with a fear of AIDS contamination avoiding places they have pathologically associated with AIDS. Engaging in these behaviours or rituals temporarily reduces distress caused by intrusive thoughts.

Why is this such a problem?

The problem with compulsions is that each time the preventive strategy is enforced, they act as a reminder of the intrusive thought, triggering their reoccurrence. This creates a vicious cycle and a worsening spiral of cognitive and behavioural “safety” reactions to obsessive thoughts. Furthermore, if these are not carried out in a specific order or to the individual’s satisfaction, their OCD will dictate that they must start again from the very beginning. These impair daily functioning and self-esteem because they are often unattainable, unusual and consume large amounts of people’s day. Some examples include being late for work after repeatedly checking that each window in the house is locked or taking the longer route to work to avoid situation associated with distress.

Many people worry that if they or a loved one has particularly distressing obsession (e.g. physical or sexual harm to a child), they might act on it. However, it is important to remember that the intrusive thoughts forming the base of the compulsions are unwanted and unpleasant for the individual, which is why they go to such lengths to prevent the thoughts from coming true. In fact, the risk is very low and there is no record of somebody with OCD acting on their obsessions.

The only risk that somebody with OCD has is to their self. Other than causing the person substantial amounts of psychological distress, somebody with an obsession about contamination may avoid certain foods or drink, which can lead to malnourishment or dehydration. Alternatively, excessive hand washing can result in a dry, red and painful skin condition. Somebody who is repeatedly late to work due to performing rituals over and over might be at risk of losing their job. One exception is that if a parent has such obsessions over their child’s nutrition, it can also lead to child growth retardation.

Although OCD is no longer officially considered an anxiety disorder, the treatments are similar. The Food and Drug Administration (FDA) have approved antidepressants after their therapeutic effects on OCD were observed. Some of these include Clomipramine, Fluoxetine, Paroxetine (adults only) and Sertraline. Although it is the easier option compared to psychotherapy, it is important to note the risk of negative side effects, such as weight, gain, a shift in biological function (appetite, sex drive, sleep), dry mouth and nausea.
Exposure and Response Prevention the most common and effective cognitive behavioural technique recommended by the National Institute of Clinical Excellence (2003). People with OCD have to face their fear (not enacting compulsions) in order to get better). It aims to make the individual realise that anxiety derived from obsessions does not persist if compulsions are not enacted, and such compulsive coping mechanisms do not influence whether they occur in the real world. Naturally, the drop-out rate is quite high (around 25%) – not carrying out compulsions or rituals provokes anxiety and fear in individuals with OCD, so the therapeutic method is done in a graded manner working upwards in intensity (systematic desensitisation).

Cognacity is an expert team of mental health professionals (psychiatrists, psychologists and psychotherapists) offering almost all forms of psychotherapy within 24 hours of booking an appointment. All clinicians have an in-depth understanding of anxiety disorders and treatments, with Dr Huw Goodwin and Dr Matthew Stiff having a special interest and expertise in OCD. They are located in Central London (54 Harley Street) – Cognacity clinics can also be found in Chelsea (102 Sydney Street), Thames Valley (Maidenhead), and Manchester (Leon House).

Sign up at the top of this page to receive our next article to your inbox.

If anything mentioned here has affected you and you want to know more, you can book an appointment by clicking below.

Book an appointment with Cognacity

Lucy Nelson
16 Sep 2020 8:30 AM
Why Patient Reviews Are Critical For The Trust Equation

Doctify Team
14 Sep 2020 3:58 PM
Everything you need to know about spinal cancer

Doctify Team
3 Sep 2020 10:36 AM
Detecting atrial fibrillation during and beyond the COVID-19 era

Your enquiry has been sent. You should hear back soon.

We have sent you an e-mail.

Please check your e-mail and click on the confirmation link to complete your registration.

Request appointment - in less than 60 seconds

Please login or sign up before you book an appointment.

You're logged in as a Specialist. You must log in as a Patient to book an appointment.
Close